skip to main | skip to sidebar

Back from the cruise...as excited as I was about going, it Far Exceeded my expectations. Someone asked me about the cruise the other day and said when I was describing it, I was positively glowing. Must have been the food. Much to update...

Good news first - my friend Edith won First Place in the block challenge! At least my block went to a good home! 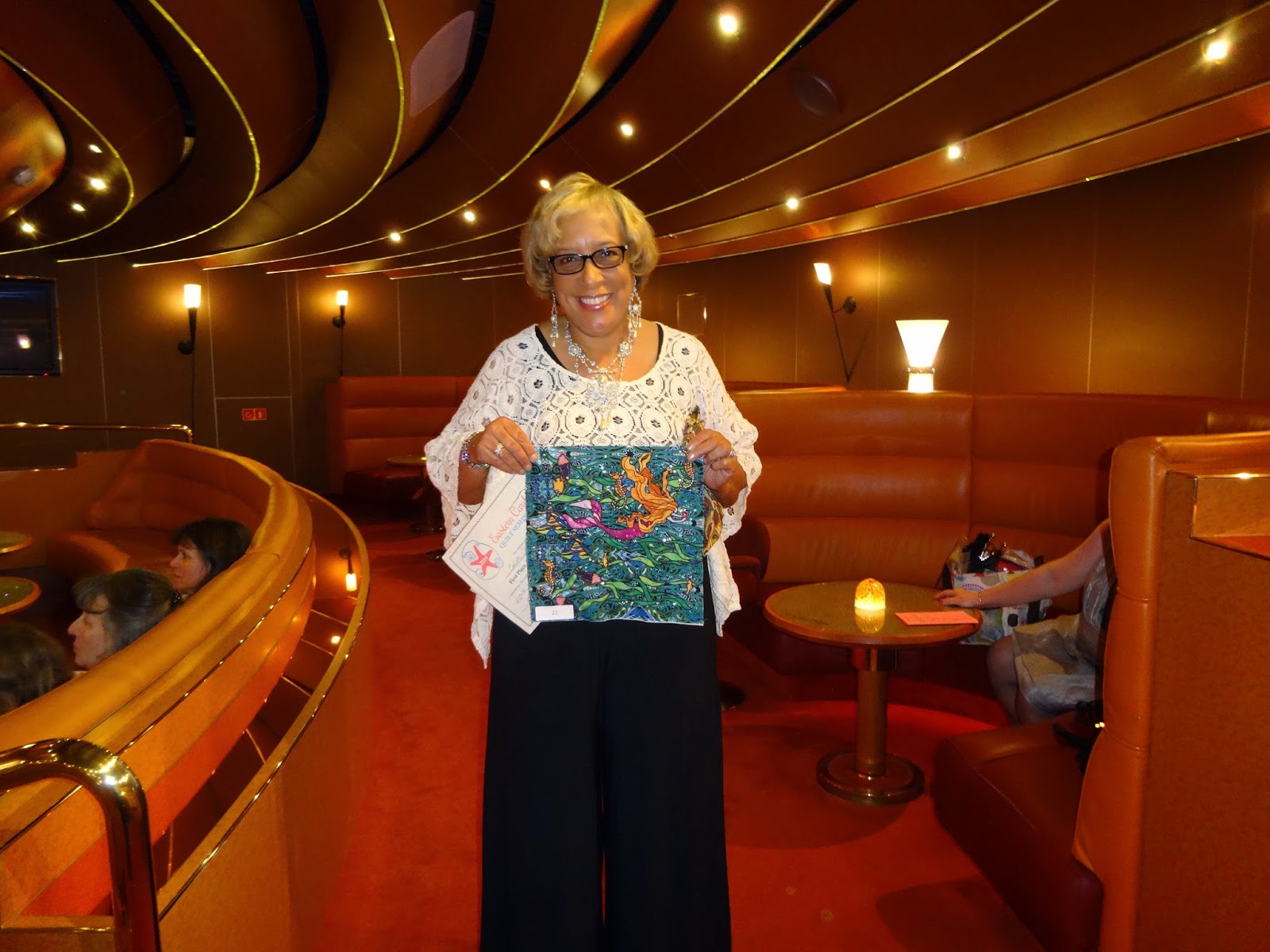 I don't have a closeup, but Edith's block featured a beautiful mermaid appliqued to the fabric, swimming amongst fish and seaweed. She says she spent 3 days appliqueing everything down. It is a gorgeous block and she deserved to win. She won 16 blocks and the second place winner won 16 blocks. 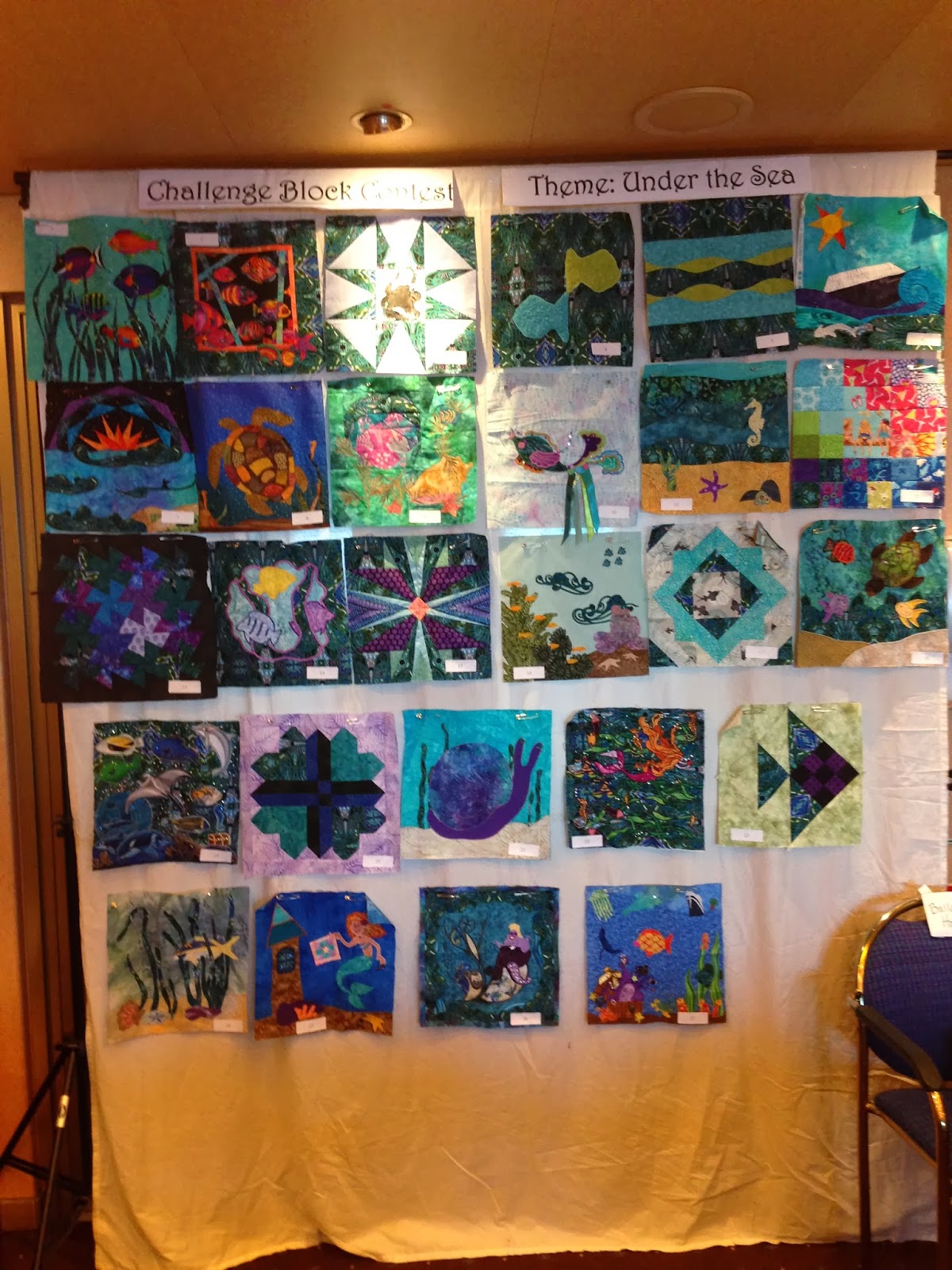 The cruise was brought to you by Quilt Seminars at Sea, and I would cruise with them again in a minute. Everything was well organized and they did their best to make sure we had a good time. By the way - the whole ship wasn't quilting! Not all 2000 passengers were there to quilt - just 50-something of us! Our instructors were (L to R) Gyleen Fitzgerald, Paula Nadelstern, Sue Nickels, and Mary Sorenson. 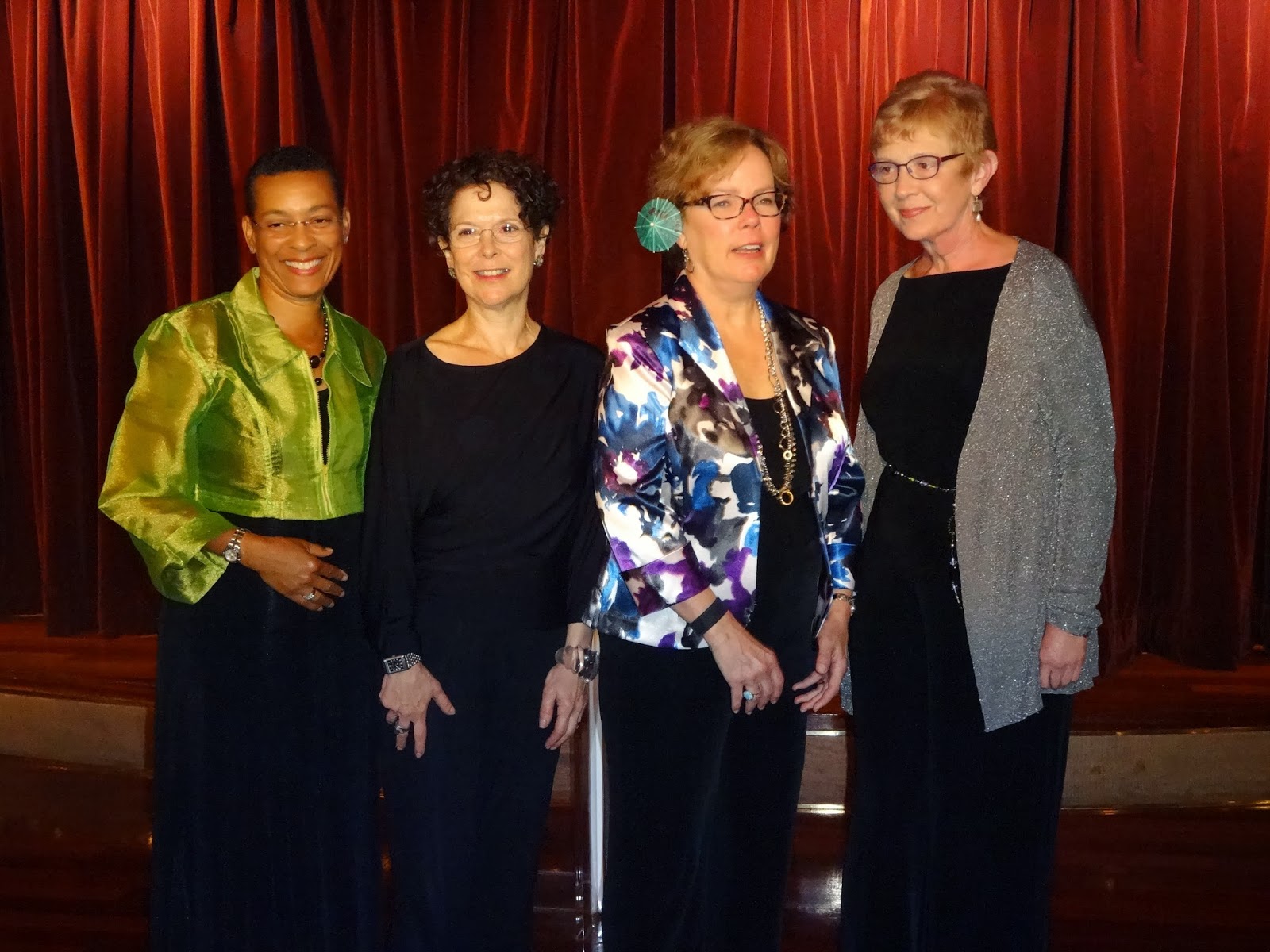 I did all three classes with Paula. Edith and Mercidene also took classes with Sue to work on free motion quilting. Quilt cruises are really a fantastic concept...when we weren't in port, we had class, and on the days we were in port, we could do all the tours just like the regular folk. As our Cruise Director said, we could choose to do a little of it, a lot of it, or none of it at all.

Funny story - getting on the bus to the ship from the hotel, someone asked me if I was one of the instructors. I knew immediately she was talking about Gyleen, and I politely responded no, I wasn't Gyleen. Then as we were boarding the ship, someone else asked me the same thing, and I politely responded no again. When the third person asked me, I said, "Yes, yes I am. I look forward to seeing you in class!" I told Gyleen this when I met her and we had a good laugh! I only confessed because I wanted her to be aware when someone said, "Don't you remember? We met yesterday?"

And...I didn't gain any weight! Who goes on a cruise and doesn't gain weight? I wasn't trying not to...we were on vacation. I did make healthy choices (some of the time!), but I also enjoyed every meal. This was my favorite dessert: 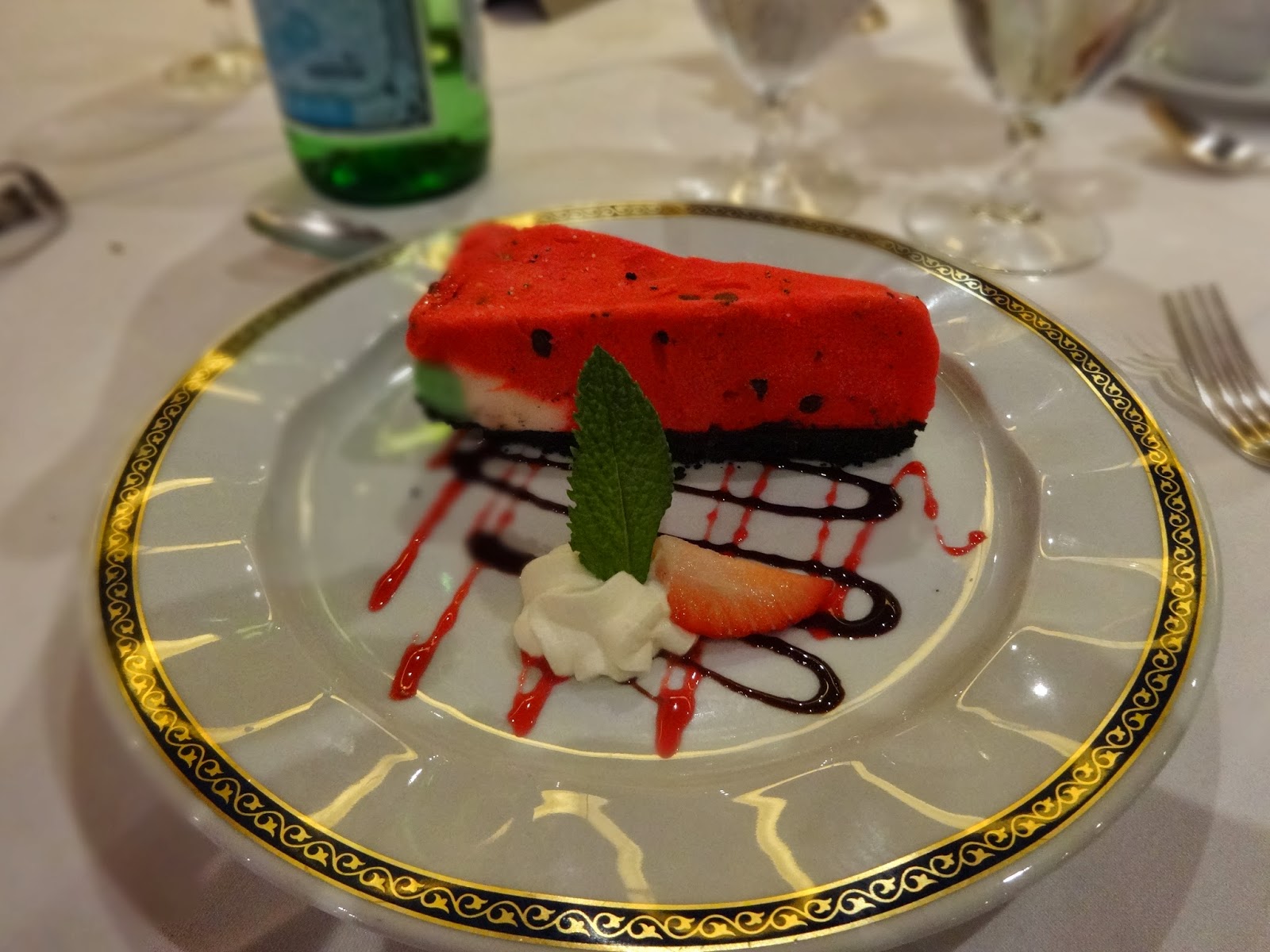 It was a watermelon sorbet on a chocolate crust...delicious! All the food was excellent...there were a few could have been better dishes, but overall...A+.

I think I didn't gain weight because we danced just about every single night. They had an outstanding band. OMG -  let me introduce you to the B.B. King Blues All Stars. Their drummer on the left, whose name I am blanking on right now, Lil Rounds, female lead vocalist and seventh place finalist on American Idol in Season 8, and Larry Springfield, male lead vocalist, who won the 1991 Star Search competition. We ran into them one day after we were returning from a tour, and they were gracious and let us take photos. 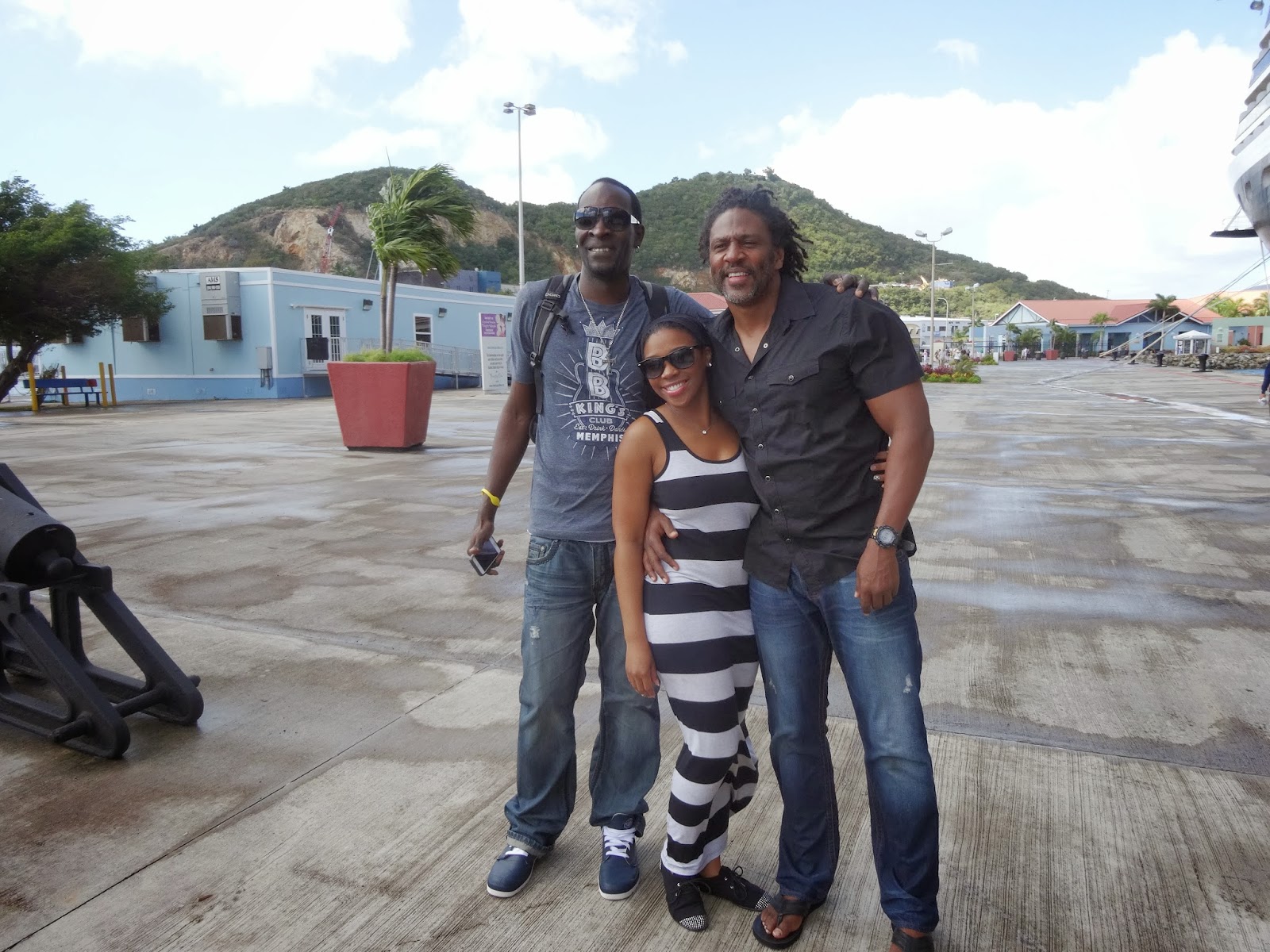 Why yes, yes that is me with their sax player, the handsome and talented Tiger Rogers. He has dimples "you could eat soup out of" (apparently this is a saying. One of the women from Mississippi said that in describing him.) 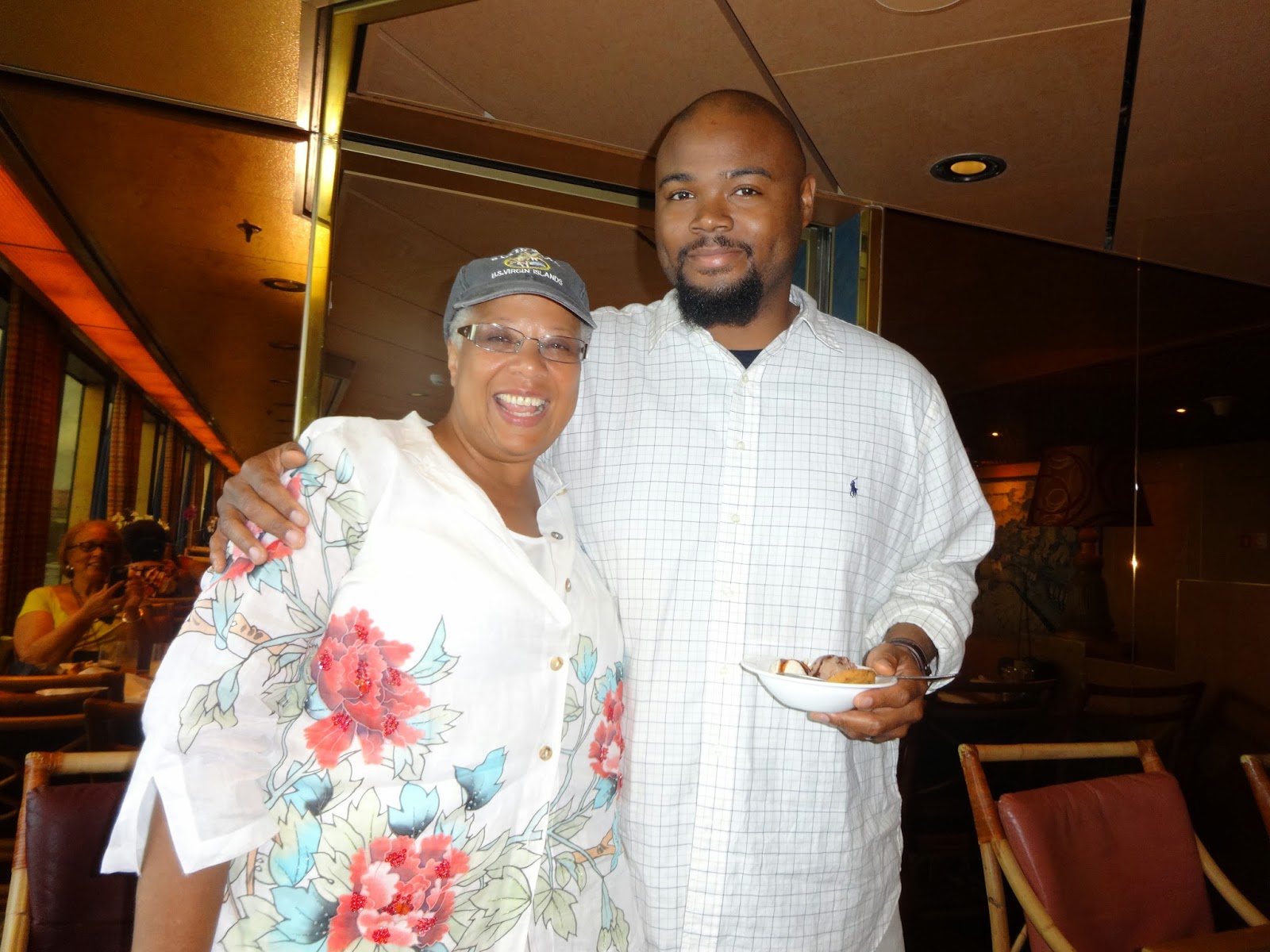 Hmmm? Projects? Oh yes - I will probably never finish this, but this is a layout of the pieces of one block from the kaleidoscope class, and here is my completed ball from the Opulent Ornament class. 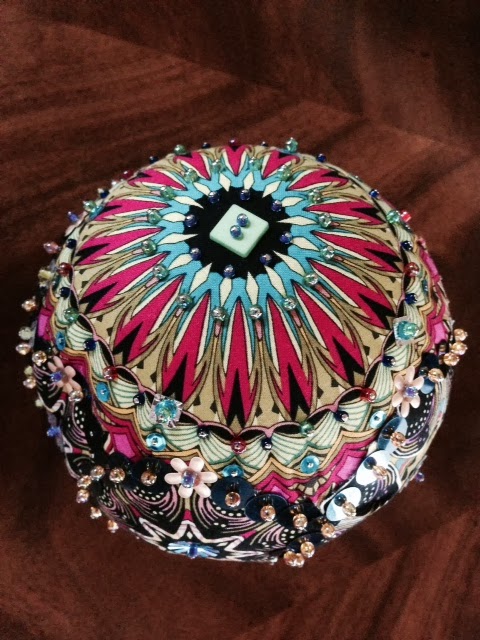 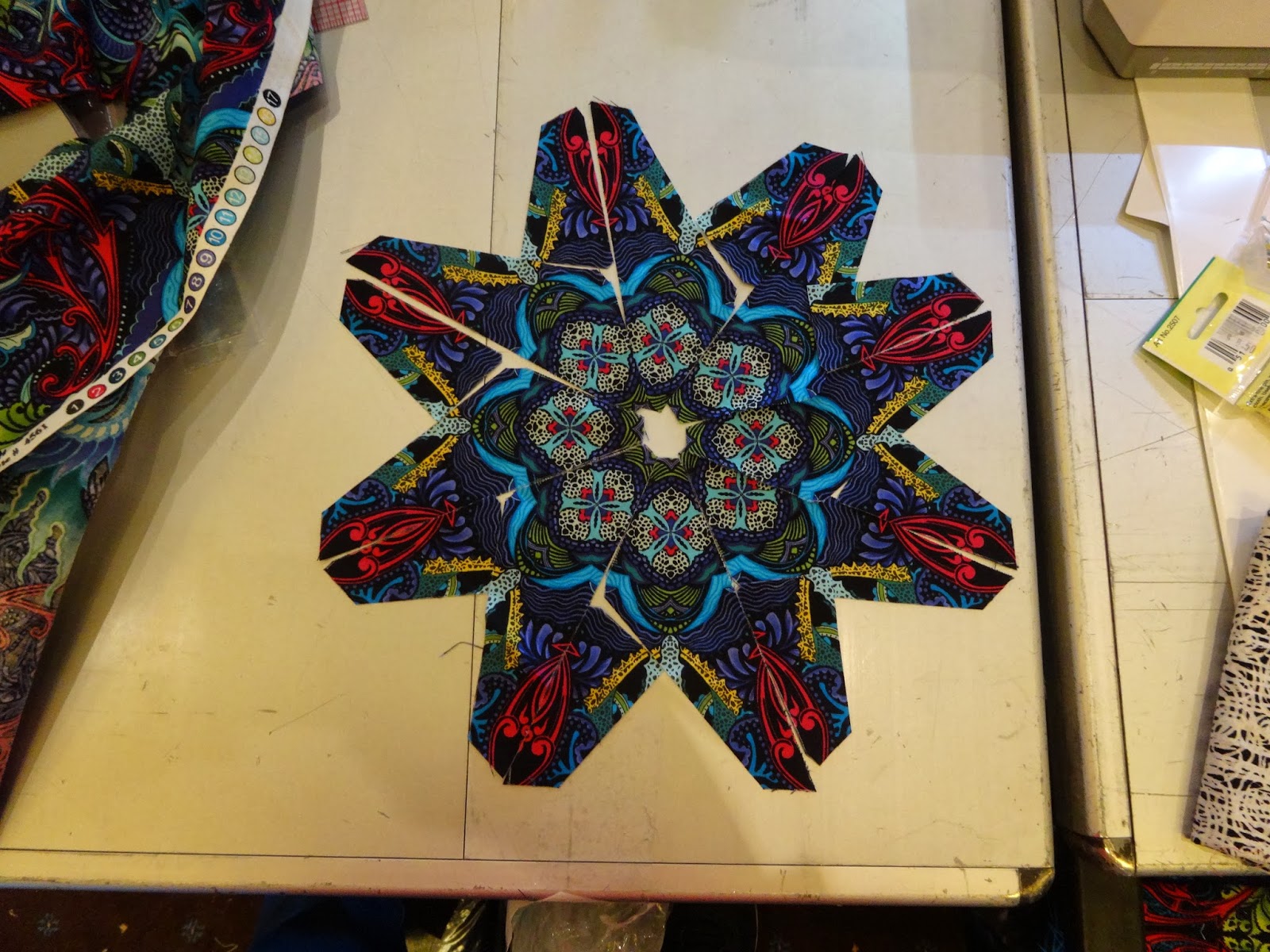 ﻿My ball was differently abled (had a huge dent in the side from travel), so I didn't want to spend a lot of time and energy on it.
All in all, a fantastic voyage. Al now wants to go on a cruise! This is the 100-year anniversary of the Panama Canal, so we have booked a November cruise! So much for no more trips than already planned. But I knew when I said it that it wouldn't happen!

My boss said dress for the job you want, not the job you have...Now I'm sitting in a disciplinary meeting wearing my Wonder Woman costume.
Posted by lenasdaughter at 2:14 PM

lenasdaughter
I'm 60-something, happily married, love to laugh, quilt, travel, and meet people. I've never met a stranger, and a friend calls me "Chatty Cathy" - I don't know why. I moved to Georgia in 2007 and I absolutely love it...except for the bugs!